Who is St Martin?

St Martin lived between around AD 316 and 397. He began his career as a Roman soldier, but one day he saw a freezing beggar in the street. He cut his cloak in two, and gave half to the beggar. Afterwards he dreamt that the beggar was actually Jesus, and it changed his life.

Martin became a Christian and resigned from the army. He later became Bishop of Tours in France. Martin is the patron saint of soldiers, beggars and France. His feast day is November 11th – Armistice Day.

This is a sculpture by James Butler called ‘St Martin and the beggar’ and can be found at St Martin-in-the-Fields, Trafalgar Square, London. We thank them for their kind permission to be able to share this image. 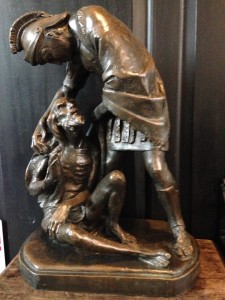